Magnus and his crew aboard the Kinloch Bravo oil rig are stationed off the Scottish coast in the dangerous waters of the North Sea. When they are due to be collected and return to the mainland a mysterious and all-enveloping fog rolls through. The rig is hit by massive tremors, and they find themselves cut off from all communication with the shore and the outside world. As the crew endeavour to discover what's driving this unknown force, a major accident forces them to ask questions about who they can really trust. Bonds are broken, allegiances formed and generational fault lines exposed. The crew of the Bravo will be driven to the limits of both their loyalties and their endurance, into a confrontation with forces beyond their imagination. 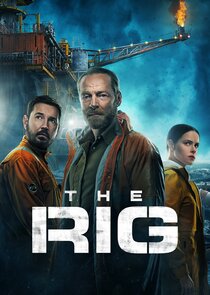 When the Kinloch Bravo's crew find themselves stranded on their production platform, first when their chopper is diverted and then by a mysterious fog that affects the entire oil field, rig boss Magnus' attempts to find a practical solution are thwarted by a horrifying accident and a growing sense of unease onboard.

The appearance of the rig's Stand By Vessel raises hopes of escape in the team – leaving geologist Rose until sunrise to try and work out the scientific nature of the mysterious ash onboard before the crew abandon ship and make a break for it. But with tensions running high, some are compelled to take the situation into their own hands, with serious consequences.

With Baz missing and presumed dangerous, the crew split into groups to search the production module and find him, and Rose takes the painful decision to isolate Fulmer. But as Rose makes a perplexing breakthrough, the manhunt becomes more frightening and mysterious when the crew are hit by power failures and paranoia, and they discover things that push them far beyond their comfort zone.

Baz and Garrow get closer to understanding their mission when they explore the pump control room, and realise they need Fulmer to help them – leading to painful consequences for Fulmer as he struggles to keep a grip on his sanity. When the crew's anxieties rise as a glimmer of potential hope turns sour, Magnus finds himself losing his grip as tensions amongst the group reach fever pitch.

The new arrivals on board from the Kinloch Charlie immediately make their presence felt, as Pictor head Coake enlists a group to undermine a weakened Magnus and force their way to the pump control. But when Coake's motives are investigated and the crew realize he isn't giving them the full truth, they find themselves locked in an urgent race for answers with lives at stake.

Scores are settled and mysteries revealed as Coake is pushed to explain Pictor's plan and the true reason for his mission onboard, Rose and Fulmer work out the horrifying extent of what the coded messages they have discovered really mean, and Magnus must put his personal demons to rest and lead the crew in one final bid for their survival.