In The Last O.G., after being released on good behavior from a 15-year prison stint, Tracy is shocked to see just how much the world has changed in his absence. Returning to his newly gentrified Brooklyn neighborhood, Tracy discovers that his former girlfriend has married an affable, successful white man, who is helping raise his twin sons he never knew existed. Wanting nothing more than to connect with his kids, but having neither the money to support them nor himself, Tracy falls back on the skills he learned in prison to make ends meet while treading on unfamiliar territory. 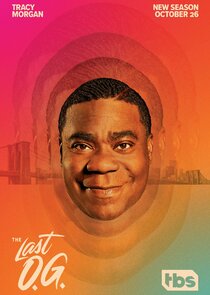 After he is shot and wakes up from a coma, Tray must reckon with past mistakes while fighting for his future.

Back on his feet, Tray looks to set the record straight with the person who shot him while reigniting his relationship with Jasmine.

Tray brings his love of cooking to a job at Wavy's new restaurant and discovers an even greater love in the process.

After Veesy declines his help, Tray decides to get enough signatures to keep the community center open in secret.

Tray begins teaching at the community center and training Javi in boxing until his mother shows up, angry he's been skipping school.

Tray's cooking class is interrupted when a young man named Demar comes to tell his pregnant girlfriend, Felicia, they have to run from the police.

After they find a suspicious hat in Amira's room, Tray and Josh decide to follow her and find out whose it is.

Amira attends college presentations, and her quick decision surprises Tray, who then works to guide Amira toward a better understanding of her identity; while cleaning out Roberta's storage unit, Shahzad makes a discovery about her past.

Veesy convinces a Brooklyn artist to paint a mural for the community center; Tray approaches Mark Breland and Teddy Atlas to train Javi; when Javi lands a fight that conflicts with prom, Josh steps in to help Amira; Shahzad makes a special promposal.

Tray excitedly prepares for his kids' graduation but is interrupted by an illicit request from Percy; after Tray helps a student out of a jam, Veesy begins to see Tray in a new light; Shahzad stresses over having to give a graduation speech.