Based on Anne Rice's iconic and bestselling novel, Interview with the Vampire follows Louis de Pointe, Lestat de Lioncourt and Claudia's epic story of love, blood and the perils of immortality, as told to the journalist Daniel Molloy. Chafing at the limitations of life as a Black man in New Orleans in the early 1900s, Louis finds it impossible to resist the rakish Lestat de Lioncourt's offer of the ultimate escape: joining him as his vampire companion. But Louis's intoxicating new powers come with a violent price, and the introduction of Lestat's newest fledgling, the child vampire Claudia, soon sets them on a decades-long path of revenge and atonement. 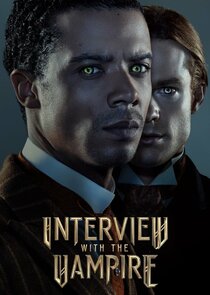 Louis de Pointe du Lac lives in 1910 New Orleans as executor-in-charge of his family's fortune; when he meets the vampire Lestat, Louis' life begins to unravel in otherworldly ways; in 2020, Louis tells his story to journalist Daniel Molloy.

Beginning his life as a vampire, Louis learns the rules of vampirism from his maker and companion Lestat. Louis discovers increasing differences between himself and Lestat. In Dubai, Louis reveals more of his modern day vampire lifestyle to Molloy.

Louis continues his life as a businessman of Storyville. When an old friend comes to town, Louis's relationship with Lestat is tested. Louis' business intertwines with growing tensions in New Orleans, leading to a new chapter in Louis' vampire life.

Claudia leaves home for a college sojourn and to learn more about vampires. Meanwhile, Louis and Lestat live through the Depression and received surprising news from Louis' sister. When Claudia returns, tensions in the family come to a boiling point.

Lestat attempts to make amends with Louis. The vampire family decides to live together once more. A surprising action from Lestat leads the family to decide to leave New Orleans, once and for all. In Dubai, Molloy has a shocking realization.

The vampire family plans to leave town after a big Mardi Gras ball. Claudia and Louis operate outside of Lestat's knowledge. In Dubai, Louis reveals a new element to the interview that changes everything.