A sprawling true-crime saga, Welcome to Chippendales tells the outrageous story of Somen "Steve" Banerjee, an Indian immigrant who became the unlikely founder of the world's greatest male-stripping empire - and let nothing stand in his way in the process. The series details the insane, darkly comedic, crime-ridden story behind the unique male revue that became a cultural phenomenon. 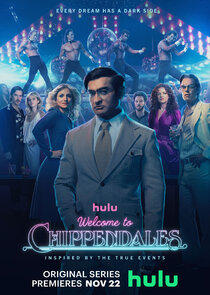 Indian immigrant Somen "Steve" Banerjee spends his days working at a gas station and his nights dreaming of being the next Hugh Hefner. A chance encounter with a Playboy centerfold and her slick promoter husband sends him and his business plan in an unexpected new direction.

As Chippendales takes flight, Steve assembles his dream team-including a shy accountant who may be more than just a business hire.

While Steve is away in India, Nick cooks up his next creative triumph. But when Steve returns home, he has other plans for the show.

As Steve's new calendar flies off the shelves, a fed-up Nick makes a pitch to New York investors. A snub from Steve provides Otis with a sobering wake-up call.