Feared among the yakuza as "The Immortal Dragon", Tatsu is a legend of the underworld with an impressive number of defeated rival gangs under his belt. However, hoping to wash his hands of his past, Tatsu gets married and devotes himself fully to the way of the househusband by diligently undertaking the cooking, cleaning, washing and grocery shopping each day. On the other hand, there's one person who's not happy about Tatsu's new domestic life — his tough, former yakuza underling, Masa. As Tatsu tries his best to pursue the way of the househusband, one assassin after another tries their hand at taking him out! 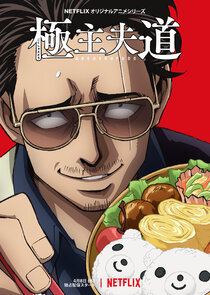 Miku needs to eat her way through a huge pile of pastries. Tatsu's no match for the typhoon. Then, Tatsu, Miku and Masa go camping.

Tatsu gets intimidated at a meeting of women's group leaders. Gokudon visits a little girl in the hospital. Miku finds Tatsu collapsed on the floor!

Torajiro gets a formidable rival — his sister. It's snowing! The popcorn is popped, but Tatsu, Miku and Masa can't decide on what DVD to watch.

Tatsu gives Miku pointers on how to play golf. A group of scary looking guys walk into the woods. Tatsu, Miku and Masa can't take the heat.

Little Suzu refuses to eat her veggies. To really get rid of weeds, you've got to pull them up by the roots. Tatsu and Torajiro have a bug fight.