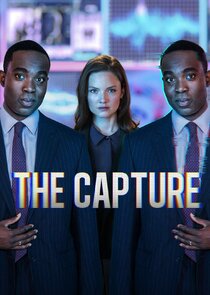 DCI Rachel Carey is living a lonely, paranoid existence, struggling with thwarted ambitions while seconded to Counter Terrorism Command's 'mapping' department. She's officially joined the highly classified Correction team, but has yet to be truly let in.

When her former colleagues DS Flynn and DI Latif bring the case of a man murdered by invisible assailants to her attention, the stakes quickly become deadly. Carey's investigation brings her into the orbit of hotshot politician Isaac Turner MP as the case's links to national and international security start to emerge. Something is very wrong, but can she work out what before Britain's security is irrevocably compromised?

And which of her colleagues can she trust?

Security Minister Isaac Turner's hacked TV interview sends shockwaves through his personal and professional life, as he struggles with an increasingly fractured reality and discovers the dark secret that is Correction.

SO15 work to contain the facts of the broadcast hack while trying to uncover the bigger picture themselves. With DS Patrick Flynn in hospital, DCI Carey and the team investigate a web of politically charged clues which seemingly lead to China. As the ongoing investigation provides more questions than answers they tread carefully, interrogating every assumption and allegiance.

Meanwhile, Isaac Turner tries to clear his name by booking himself onto Newsnight for a fresh interview, only to find himself walking into a new trap.

Carey's investigation widens and she makes several important new allies... but can they be trusted?

DCI Carey investigates a TV hack amidst a growing media storm. Security Minister Isaac Turner finds himself engulfed in an unjust furore over Deepfake Isaac's racial profiling comments on TV, leading to him being expediently sacked by the Home Secretary. A major suspect in the hack is seen heading towards the airport and must be stopped before he leaves the country. The invisible assassins strike again, revealing the extent of which they are capable. Isaac plays a crucial role in the investigation, but a net is tightening, and the Operation Vanguard team suffer a tragic blow.

Isaac's paranoia intensifies in the wake of his hacked TV interview, and his family ties are put to the test when claims about his 'love child' become headline news. Reporters circle the family home, forcing Simone to leave with their children – after which Isaac's outburst against the media is filmed and goes viral. Isaac's digital doppelgänger sets up an interview for him on BBC Breakfast, during which the results come in for his paternity test. S015 widen their search for the invisible assassins and recalibrate their thinking as to who might be behind the attacks. Garland discovers a new perspective on the CIA's Frank Napier and Carey feels the net tightening around her as allegiances buckle and shift.

Will Isaac Turner meet his digital doppelgänger? DCI Carey pursues a risky new suspect – will she finally find out who is behind everything?

The net tightens. After DCI Carey is kidnapped, her instincts are proved right – but she's in more danger than ever before, while Isaac Turner pursues his own agenda.