RuPaul's Drag Race is a Primetime Emmy Award winning American reality competition television series, hosted by five time Emmy Award Winning Host and international Drag superstar RuPaul. The show features drag queen contestants competing in weekly challenges such as photo shoots, comedy performances and stomping the runway in the hopes of avoiding the bottom two - where they will have to lip sync for their lives. 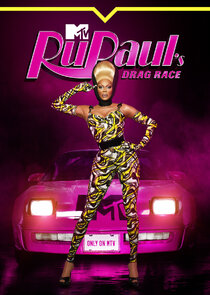 All-new queens make their debut in the werk room, kicking off Season 15 with a photo shoot and a musical number to introduce a talent show, and Ariana Grande returns to guest judge.

For the Season 15 premiere talent show, the queens flaunt their unique skills and then walk the runway in looks that show their personal styles, and pop superstar Ariana Grande guest judges.

Ru serves up a double helping of the celebrity impersonation game show, with the queens playing in two rounds, with two different casts of characters. Amandla Stenberg (The Hate U Give) guest judges.

The queens exchange flatulence for canned laughter, as the melodramatic acting challenge returns in sitcom form. Actor Harvey Guillén (What We Do in the Shadows) guest judges.