After investing all his savings to travel with his son to the World Cup, Lucho is shocked when he learns that the Argentine team gets disqualified from the games. He and a handful of his co-workers, a flashy group of losers about to lose their jobs, decide to take "justice into their own hands", so they devise a plan to steal the celebrated World Cup trophy during its promotional tour of Argentina. This way, the national team could rejoin the games, and he and his son could travel to World Cup as originally planned. 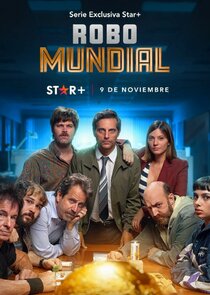 Argentina is disqualified from the upcoming World Cup, sending the country into a state of mourning. Lucho, who had made arrangements to go to the prestigious tournament with his son, hits rock bottom, both economically and emotionally. But a brilliant idea could change everything: steal the World Cup Trophy.

Lucho and Wally recruit a group of beautiful losers to take part in the robbery. But putting together a gang and a master plan isn't as simple as they imagined.

Lucho and his gang put into motion their plan to steal the World Cup Trophy. But absolutely nothing goes as planned on the big day.

In possession of the World Cup Trophy, the gang takes to the internet with its ultimatum: if they want it back, they have to reinstate Argentina in the tournament. But when the authorities give no response, they begin to feel the pressure. And now, what do they do with the trophy?

The group debates over what to do with the trophy, while each member is beset by the worst misfortunes imaginable. Should they smelt the trophy? Sell it? Hide it? Manila's pressure campaign begins to close in on the gang, forcing a rupture.

Lucho goes after Fafa and the trophy. Meanwhile, chaos ensues as news that the trophy is somewhere in the city leads scores of people into the streets to find it. Amid the disorder, security forces close in on members of the gang.