When a successful cisgender man who's got it all figured out becomes pregnant, he's forced to confront social inequities he'd never considered before. The Netflix original series He's Expecting is based on the manga of the same name by Eri Sakai. The show humorously reverses the lifestyles of men and women and explores the differences between them, centered around the question, "What if a man became pregnant?" The protagonist is faced with various issues ingrained in society that had been invisible to him until his pregnancy. This is a story of growth as both the people around him and he himself gradually change while he battles these issues. When an elite ad man gets pregnant, he's suddenly subjected to prejudices against pregnant men, forcing him to rethink everything he knew. The story takes place in a world where - in rare cases - men can conceive and give birth. Kentaro Hiyama, an elite ad man, suddenly finds out one day that he is pregnant. His partner, Aki Seto, never thought she would become a parent, so the two are at first confused by this unexpected event. As a pregnant man, Kentaro will face the scrutiny of the company and society, and will shed light on the hardships experienced by pregnant women. Challenged by many problems associated with modern pregnancy and childbirth, the two will have to face reality and make the ultimate decision: to have a baby or not. 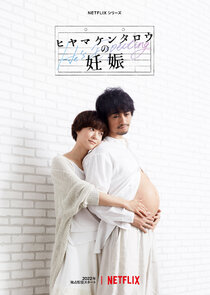 Kentaro Hiyama attributes his success to his ability to plan out every aspect of his life — but then, something completely unexpected happens.

Morning sickness and other bodily changes start to affect Kentaro's work. He finally meets up with Aki and tells her about his pregnancy.

While at the hospital, Kentaro meets another cisgender pregnant man and the two become friends. The client is unimpressed with Tanabe's ideas.

The ad campaign featuring Kentaro is a huge success, making him famous. With Miyaji, he launches an online community for pregnant men.

Aki goes home for her sister's wedding and ends up butting heads with her conservative father. On her way back to Tokyo, she gives Kentaro a call.

A figure from Kentaro's past comes back into his life, causing friction with Aki. She then finds out about a great job opportunity — in Singapore.

Aki makes a decision about the job in Singapore. Kentaro holds a press conference to apologize for the scandal caused by his father.

Kentaro goes into labor and is rushed to the hospital. Kentaro's parents and Aki wait together for the baby to be delivered.