Set amid the grit, greed, and glory of 1980s New York, Empires of New York chronicles the meteoric rise of five icons – Ivan Boesky, Donald Trump, Leona Helmsley, Rudy Giuliani and John Gotti – who not only reshaped the city but contributed mightily to the world we live in today. Drawing on exclusive interviews, never-before-told stories, and secret tapes, the series follows titans of the era who shared a singular trait: the insatiable need to win at all costs. Seizing opportunity in an era jolted by one cultural upheaval after another – MTV and 24-hour news, hip hop, drugs, the onset of AIDS – they broke rules, flaunted their wealth, and delighted in the destruction of their enemies. And oddly, at times America came to love them for it. 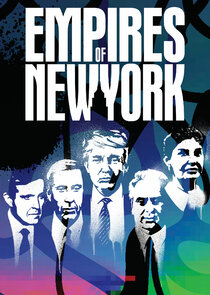 At the dawn of the '80s, America finds itself in deep decline, and New York seems to symbolize everything that's gone wrong. It's crime-ridden, strapped for cash, dark and dirty. But for five would-be titans looking to seize their moment – Donald Trump, Ivan Boesky, Leona Helmsley, John Gotti, and Rudy Giuliani – chaos spells opportunity. With a keen eye for press and an aggressiveness the city's never seen, they begin their quest for power and fame – forever changing the world as we know it.

It's 1983, and the Big Apple is back. Wall Street is booming, yuppies are crowding the clubs, and five up-and-coming icons – Donald Trump, Ivan Boesky, Leona Helmsley, John Gotti, and Rudy Giuliani – are enjoying their first big taste of success. It only leaves them wanting more. Intoxicated by the idea of more money, power, and fame, some begin to cross lines – if they haven't done so already. And no one seems interested in stopping them.

By the mid '80s, New York's icons begin to change the way we think about power and success. Donald Trump, Ivan Boesky, Leona Helmsley, John Gotti, and Rudy Giuliani brag about their victories, show off their wealth and openly target their enemies.

It's 1986, and New Yorkers are fawning over five seemingly unstoppable icons. But, there are secrets behind the successes of Donald Trump, Ivan Boesky, Leona Helmsley, John Gotti, and Rudy Giuliani. And when the public learns just who their heroes really are, the consequences are devastating.

When Black Monday hits, the market crashes and the great bull market of the '80s goes down with it. New York and the country as a whole are left with a brutal hangover – and the party is over for the Emperors of New York as well.

The titans who helped remake New York City are now being devoured by their own creation. At the dawn of the '90s, they're either sitting in jail, awaiting sentencing, or licking their wounds after humiliating defeats.