From the minds of Fred Armisen, Bill Hader and Seth Meyers comes a new series Documentary Now! that looks back on 50 years of excellence and integrity in documentary filmmaking. See Fred and Bill investigate drug cartels, join an indifferent ‘70s rock band, reenact Iceland's annual Al Capone Festival, take part in a dramatic exposé of the world's first documentary about the Inuit and much more. 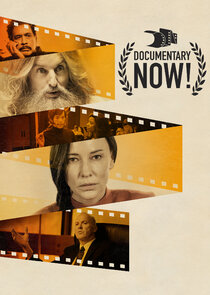 A fly-on-the-wall portrait of a hair salon in the small coastal town of Bagglyport as they prepare their annual stylebook.

In the early 1980s, a visionary German filmmaker tries to will his magnum opus into existence while working in the remote, punishing conditions of the Russian Ular mountains. Part II.

A chronicle of the iconic 1974 Craig Maes (Field Rock) showdown dubbed "The Melon vs. The Felon."

A filmmaker forms a deep, emotional, and financially taxing relationship with a monkey.

Celebrated French filmmaker Ida Leos searches for why she no longer experiences "frisson," the goosebumps that have always been her guide.