On Dead Set on Life, boisterous chef Matty Matheson isn't picky about what he eats -- he'll eat a $6 sub at a gas station, then later in the day eat a meal made from some of the most expensive, sought-after ingredients available. Now, the Toronto-based chef is combining his love of food and adventure as he heads across his native Canada to experience some of the foods made by his fellow countrymen, whether they're closer to cheap gas-station eats or delicacies at five-star establishments. Matheson, along with new and old friends, eats a variety of foods that he encounters on his journey. 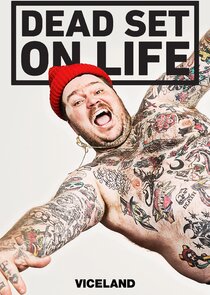 Matty ventures into the everglades under the protection of Shelley Wooten, an eighth-generation Floridian fighting to keep the hardcore culture of the Gladesmen alive.

Matty catches up with chef, Adam Perry Lang as he plans the opening of his new L.A. restaurant. Together, they enjoy some BBQ, boxing, fishing, knife-making and arson.

Matty and Master Rang head to Vegas in a Caddy convertible to shoot machine guns, try their luck as cowboys, and uncover the secrets of great prime rib.

Matty hangs with reformed gangsters, Spanto and 2Tone of Born X Raised – two Venice Beach natives fighting to save the spirit of their hometown against gentrification.

Matty teams up with former soldier turned chef, "Sniper" Steve Austin, for a culinary adventure in the deadly outback of Australia's Northern Territory.

With its posh ice fishing and frozen lake car races, Chef Hayden Johnston tries to convince Matty that his Thunder Bay home is "The Greatest City in the World."