Sorozatok
6 IMDb
Maxine is the creator and lead host of the popular daytime television show The Lunch Hour – which also has as co-hosts Mo, Kibby, Nina and Heather. On screen, they are great friends, but behind the scenes, they lives a world of power struggles and super-egos. Meanwhile, Maddie, a former host, wants to return to the show and Cecile, a bestselling writer, also wants to become a co-host. This situation worsens when Anna, the Maxine's former assistant, returns as the hard editor-in-chief of a great magazine, who wants to expose the truth about them. 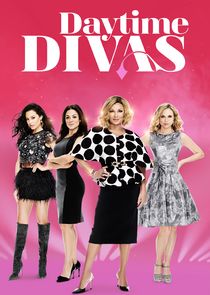 Every weekday at noon, Maxine, Mo, Heather, Kibby, and Nina—hosts of The Lunch Hour —are watched by millions of viewers as they discuss life, love, politics, and the juiciest gossip. But behind the scenes, it's even juicier.

Mo's plot to take over the show is set back by Maxine's unexpected return. As Kibby's difficult past returns to haunt her, Nina struggles to find a way to explain her pregnancy.

News of an unauthorized biography has Maxine worried about how much it will expose. Nina's efforts to hide the truth about her pregnancy threaten to unravel.

As Heather sizes up a new co-host, Maxine launches a behind-the-scenes campaign to discredit the author of her unauthorized biography.

With a crisis management consultant advising her, Maxine looks to repair the damage from a series of scandals – and starts by hiring her most dangerous adversary.

As a new co-host sets Maxine up on a blind date. Heather experiences marital troubles that upend the celebration of Kibby being sober for a year.

A new transgender co-host prompts Heather to consider revealing her son's secret. A visit by William's mother threatens to expose his relationship with Maxine, while Shawn and Nina disagree over custody of their baby.

Mo returns to torment Maxine at the Daytime TV Awards. As Heather's dress draws some unwanted attention, Kibby is forced to deal with a problem from her past.

As Mo (Tichina Arnold) returns to The Lunch Hour, Kibby (Chloe Bridges) fights to protect her sister from being exploited by an older actor.

Heather's decision alienates her co-stars; Kibby spirals out of control; everyone is reeling from the aftermath of what happened backstage as tensions come to a head.