Complications centers on disillusioned suburban doctor John Ellison who, while still dealing with the emotional effects of his daughter's death, unexpectedly becomes a vigilante hero when he intervenes in a drive-by shooting, saving a young boy's life. When John learns the boy is still marked for death, he's compelled to save him at any cost. Through this journey, he must compromise his morals, often doing the wrong thing for all the right reasons.

The series also features Gretchen, a reckless but capable nurse; John's wife, Samantha, who while attempting to support her husband is struggling with her own issues; and John's by-the-book coworker, Dr. Bridget O'Neill, who finds herself dealing with the aftermath of his actions. 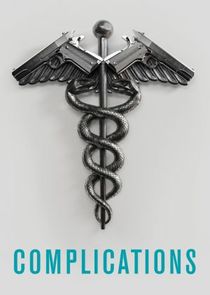 The drama about a disillusioned ER doctor opens with Ellison saving the life of a young boy when he intervenes in a drive-by shooting.

Ellison scrambles to locate Antoine when the boy disappears from his bed at the surgical center; and Polk tries to convince a patient to lie about her medical condition in order to keep John out of their supervisors' crosshairs.

John visits Antoine's father, the leader of the VCC gang, in prison, and tries to disentangle himself from his responsibilities with Antoine. Meanwhile, things get out of control when Gretchen confronts Hillary's abusive boyfriend at his home.

Gretchen makes expensive arrangements to hide Antoine in order to prevent Bridget from learning that John illegally transferred him to the surgical center. That means John needs to ask the gang for money, however. In other events, a past indiscretion tests John's relationship with Samantha.

A gang shootout results in a flood of victims in the ER. John tries to halt the escalating violence, but to succeed he must navigate rival gang members and the police. Meanwhile, Gretchen tends to the young woman who sparked the bloodshed.

Det. Holden of the Gang Task Force questions John about his suspicious activity; and Gretchen travels to the gang neighborhood to save a young boy.

John wants to help Gretchen, but doesn't want to circumvent the law; and Samantha's doubts about John are increased by information provided to her by Kyle.

John tries to rein in his compulsions, but is tested when he's tipped off about an impending massacre. Samantha, meanwhile, turns to Det. Holden for answers.

Detective Holden forces John to testify against the Latin gang, provoking their anger. Meanwhile, Samantha's past threatens her marriage.

Flashback to a month ago. A mysterious robber bursts into a Loco stash house, stealing stacks of cash and gunning down the 17-year-old little brother of a gang bigwig.