Children of the Underground

Children of the Underground tells the pulse-pounding true story of charismatic vigilante Faye Yager, who built a vast underground network that hid hundreds of mothers and children, saving them from the alleged abuse of husbands and fathers when a broken court system would not. Stepping out into the spotlight of daytime TV talk shows to raise awareness for the cause, Yager placed herself in the crosshairs of the FBI, setting off a highly publicized trial that raised the specter of a dark side to the movement. When she helped the ex-wife and children of the wealthy banker who pioneered the ATM disappear, Yager finally met her match and a loud public reckoning was at hand. Was Faye Yager actually the saint so many people made her out to be? Enter the true story of her Underground and learn the tangled truth about this visionary but haunted heroine. 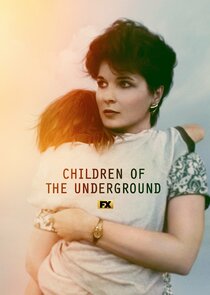 Motivated by her daughter's tragedy, Faye Yager is a vigilante on a mission to protect sexually abused children when the justice system fails. Faye ushers April and her daughter Mandy into her underground operation to escape Mandy's allegedly abusive father, but her work hiding families lands her in the crosshairs of law enforcement.

As Faye's criminal trial begins, the origin story of the Underground is told and more of Faye's complexities are revealed. Christine, a former child of the Underground, looks back on her experience and more details about Faye's devastating past come to light. Michelle, Faye's daughter, tells her story.

As Faye's trial continues, we look back on the "Satanic Panic" craze that swept America and how the effects rippled throughout Faye's Underground. Kaylee, another former escapee, and Christine reflect on the allegations that they were being abused using satanic ritual practices. Faye's trial reaches its dramatic conclusion.

In the aftermath of the trial, Faye finds herself and her network on the defensive with a growing number of enemies and critics. After four years of living a new life, April and Mandy are caught by police and April faces a trial of her own. A newspaper article documenting the Underground leads to what could be Faye's biggest conflict yet.

Faye reckons with threats levied against her in the wake of a lawsuit filed by a multi-millionaire father, her most powerful adversary thus far, and the future of the Underground hangs in the balance. As adults, Kaylee and Christine look for answers about their alleged abuse and Michelle and Mandy find closure at last.