Can't Get You Out of My Head

We are living through strange days.

Across Britain, Europe and America societies have become split and polarised not just in politics but across the whole culture. There is anger at the inequality and the ever growing corruption - and a widespread distrust of the elites.

And into this has come the pandemic that has brutally dramatised those divisions.

But despite the chaos there is a paralysis - a sense that no one knows how to escape from this.

This new series of films by Adam Curtis tell the story of how we got to this place. And why both those in power - and we - find it so difficult to move on.

The films trace different forces across the world that have led to now, not just in the West, but in China and Russia as well.

It covers a wide range - including the strange roots of modern conspiracy theories, the history of China, opium and opiods, the history of Artificial Intelligence, melancholy over the loss of empire and, love and power. And whether modern culture, despite its radicalism, is really part of the new system of power.

And the films are told in a different way - they are an emotional history of what went on inside the heads of all kinds of people.

Because in the age of the individual - what you felt and what you wanted and what you dreamed of were going to become the driving force across the world.

What was forgotten in that age was that much of what we feel is also formed by the society around us. Above all by the power structures.

And now those structures are decaying - everywhere - their weakness and uncertainty makes us feel empty and frightened of the future.

Can't Get You Out of My Head is an epic history that shows how and why that happened. How we made this particular world. And that it was not inevitable. 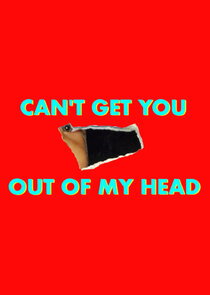 We are living through strange days. Across Britain, Europe and America societies have become split and polarised. There is anger at the inequality and the ever growing corruption - and a widespread distrust of the elites. Into this has come the pandemic that has brutally dramatised those divisions. But despite the chaos, there is a paralysis - a sense that no one knows how to escape from this.

Can't Get You Out of My Head tells how we got to this place. And why both those in power - and we - find it so difficult to move on. At its heart is the strange story of what happened when people's inner feelings got mixed up with power in the age of individualism. How the hopes and dreams and uncertainties inside people's minds met the decaying forces of old power in Britain, America, Russia and China. What resulted was a block not just in the society - but also inside our own heads - that stops us imagining anything else than this.

The story of what tore the revolutions in the 1960s apart. Jiang Qing in China, Michael X in London, Afeni Shakur in New York believed that millions of people's minds were haunted by the corruption and the violence of the past. They wanted to show people how to escape those ghosts.

But they hadn't reckoned with the fact that the old structures of power still haunted their minds too. They too had been scarred by the past – and some of them wanted violent revenge. While psychologists and neuroscientists were starting to discover what they said were hidden forces inside the human brain that really controlled what they did. But the people weren't aware.

The story of how in the 1970s those in power set out to create a world free of the dangerous big ideas of the past. They banished the grand dreams of changing the world. And replaced them with money. People would live from now on in their own heads – in their own dreams. And the banks would lend them the money to create those dreams. While China would supply a wave of cheap consumer goods on a scale never seen before in the world.

But then money broke free across the world. And people started to get frightened that things were out of control. Not just money - but the world's climate too seemed to be behaving in a strange, unpredictable way. The systems seemed to have a life of their own. Beyond the ability of anyone to shape and predict

No one trusted politics or politicians any longer. Instead we were all one world of free individuals. And we could intervene to save other individuals around the world without bothering with old politics and power. And people became what they as individuals truly were – emotionally and sexually. But power was mutating and finding ways to work its way back into our heads.

The politicians realised that they no longer had the support or the trust of the people. So they switched sides and gave up being our representatives who would challenge the powerful on our behalf. Instead they began to tell us what to do on behalf of the powerful. And they made new alliances - with the psychologists who said that human beings were irrational and needed to be managed. But we didn't notice because we were too busy shopping.

It wasn't just the Slave Trade. 150 years ago Britain had wrecked China by forcing opium on the country. It made Britain the richest and most powerful country in the world. But it enslaved the minds of millions of the Chinese and helped destroy the society. But then the British got frightened of what they had done and created a dream image of a Britain that had never existed. To hide from the fear.

This film tells the story of how from the end of the 19th century a magical vision of Britain's feudal past was created by artists and writers. How folk music and folk dancing was invented to create a kind of safe dream of the nation that could hide the violence and the horrors. The dream persisted under the surface of the 20th century. But as the fears and uncertainties and the chaos of the last few years rose up millions of people started to believe that dream. That it was real.

The final episode tells how the strange paralysis that grips us today was created. How all the different forces of our age - that started out as separate have come together to create what is a block against imagining another kind of future than this.

How, money and debt, melancholy over the loss of empire, the strange roots of modern conspiracy theories, the history of China, opium and opioids, Artificial Intelligence - and love and power have all fed into creating the present time of anxiety and fearfulness about the future.

And whether modern culture, despite its radicalism, is really also part of the rigid system - in the West and in Russia and China - where those in power have run out of all ideas. The film also lays out what are the different possible roads from here into the future, and the choices we will have to make about the very different futures we will have to choose very soon.