Sorozatok
6.6 IMDb
Billy and Cody Lefever dream of a new life beyond their working class roots and move to "The Bakken" in North Dakota, booming after the biggest oil discovery in American history. They're soon pitted against a ruthless tycoon who forces them to bet big and put everything on the line, including their marriage. 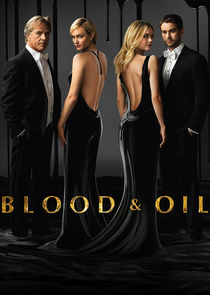 Billy and Cody Lefever move to North Dakota hoping to cash in on the largest oil discovery in American history; Cody becomes uncertain about her husband's choices when Billy crosses paths with a powerful oil baron named Hap Briggs.

Suspicions abound following the robbery; Wick scrambles to hide his involvement in the crime that nearly killed his father; Hap's daughter arrives, which sparks a rivalry with his wife.

Hap invites Wick to participate in a new venture; tensions are raised when Billy tries to get on board as well; a robbery suspect is arrested; Jules and Hap rekindle their relationship.

Billy turns to an unlikely ally for help in his quest for revenge against Hap; Wick ignores Hap's wishes and continues to see Jules, and even gets Carla to help throw her a birthday party at the house; and AJ makes a major decision after things come to a head with Lacey.

CJ deals with his brother's Mexican vacation and Particle Drilling; delays at the drill site cost time and money.

CJ is trying to drill through granite a mile beneath the surface and it compromises the particle drill bit.

CJ deals with his brother's Mexican vacation and Particle Drilling; delays at the drill site cost time and money.

Briggs Oil is celebrating its 30th Anniversary, and the party must go on, even in the wake of the intensified federal investigation into Hap's business dealings. Suspecting there's an informant in his ranks, Hap clamps down on security and nearly exposes his son, Wick, as the source of the leak. This leads Wick to recruit an unlikely accomplice in his desire to bring down his father. Meanwhile, Annie sets up shop in Rock Springs with her new partner, Billy, who finds himself increasingly preoccupied as his lies begin to catch up to him in the form of Gary Laframboise, who threatens to expose the truth about Billy.

With Carla behind bars after taking the fall for the stolen report, Hap is more determined than ever to find the mole at Briggs Oil who put her there. But first, Annie pays Carla an unexpected visit to propose a deal that would give both women what they want. Meanwhile, Jules' brush with death brings both Briggs men rushing to her bedside, providing her with an opportunity to come clean with their secrets. Despite Billy's profuse apologies, his lies have pushed Cody over the edge, and Billy fears he may never be able to make things right. Later, Hap and Annie face off against each other as they prepare to make their biggest play yet. May the best Briggs win.

In the Season 1 finale, Billy chooses between his marriage and the oil game; Cody is tempted by another man; Annie and Hap consider teaming up; AJ recruits Tip to help his son; and Hap and Wick butt heads at the Briggs Christmas Eve gathering.